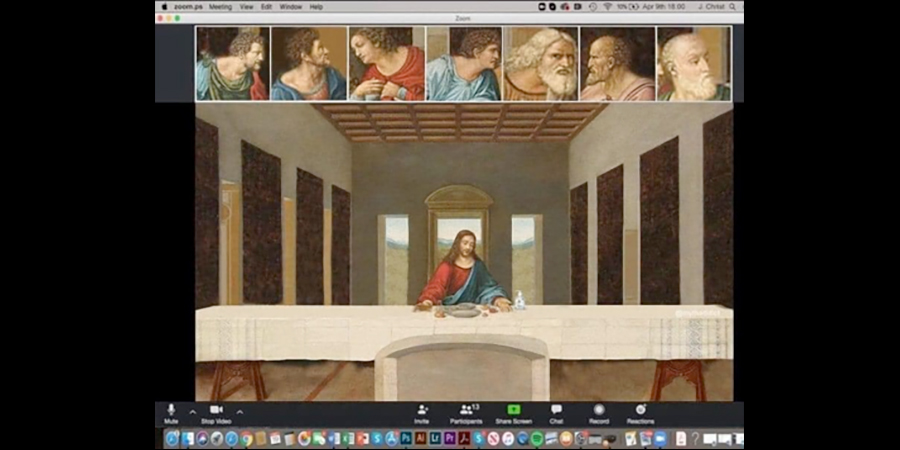 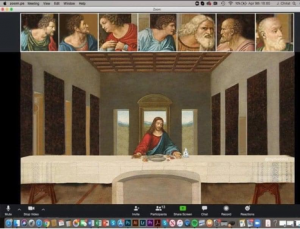 While we shelter in place, many church meetings are happening via the live tele-video application called “Zoom.” A meeting participant’s computer screen might look like this, with the faces of everyone in attendance displayed from wherever they are, in small frames along the top, and whoever is speaking, front and center. This Zoom version of the Last Supper illustrates the difficulty in trying to celebrate Maundy Thursday worship ‘virtually’. The gospel stories of the Last Supper combine to present a highly tactile, sensual event. The participants were not separated from one another. In fact, they were so close they would have felt the warmth of each other’s bodies as they sat together around one table. The smell of herbs, wine, fresh bread would have pervaded that upper room. Eating and drinking, tasting a shared meal, they probably jostled each other at the dish, perhaps spilling on themselves or the floor. Their voices, familiar to one another, would have filled the air, talking over each other, reminiscing about their adventures with Jesus, while Jesus looked around at each beloved face, knowing what they all seemed slow to understand—that his time with them would soon be over.Already close, the way Jesus purposefully chose to enact his love for his disciples that night drew them physically, even closer: the sensation of water as he washed their feet, one by one; the intimate touch of his hands on their flesh; the rub of the towel on their callouses. Then the tearing of bread and the instruction to eat, paired with the image he offered of his own body, broken. The wine poured into a cup from which he told them all to drink, even as the taste of it must have soured in their mouths at the thought of his blood spilling out. Surely, he had their attention for in no case, in the Jewish world, was blood to be eaten.

Earlier, Jesus had said to them, “Unless you eat the flesh of the Son of Man and drink his blood, you have no life in you.” (John 6.53) The disciples responded, “This teaching is difficult; who can accept it?” (John 6.60). ‘Difficult’ is understatement. ‘Shocking’ may come closer to what the disciples felt. There is shock value in Jesus’ actions at the Last Supper. He is about to give up his life, and he wants that to be remembered. His body will be broken and his blood will be shed, and he wants that to be remembered.

In worship we usually celebrate the Sacrament of Holy Communion as a sign of peace, unity, love. It’s ‘breaking bread’ together. Participation in this meal is a joy, a blessing, a sign of abundant life into which we all are invited. But we miss something important if we don’t also understand it as a risk. Later, as the disciples came to understand themselves, collectively, as the body of Christ in the world, they knew that they were at risk, bodily, in the same way that Jesus was. Anyone who eats the bread and drinks the cup, who seeks to follow the way of Jesus, assumes a risk. It is indeed a difficult teaching; one that is completely real, and not really virtual.